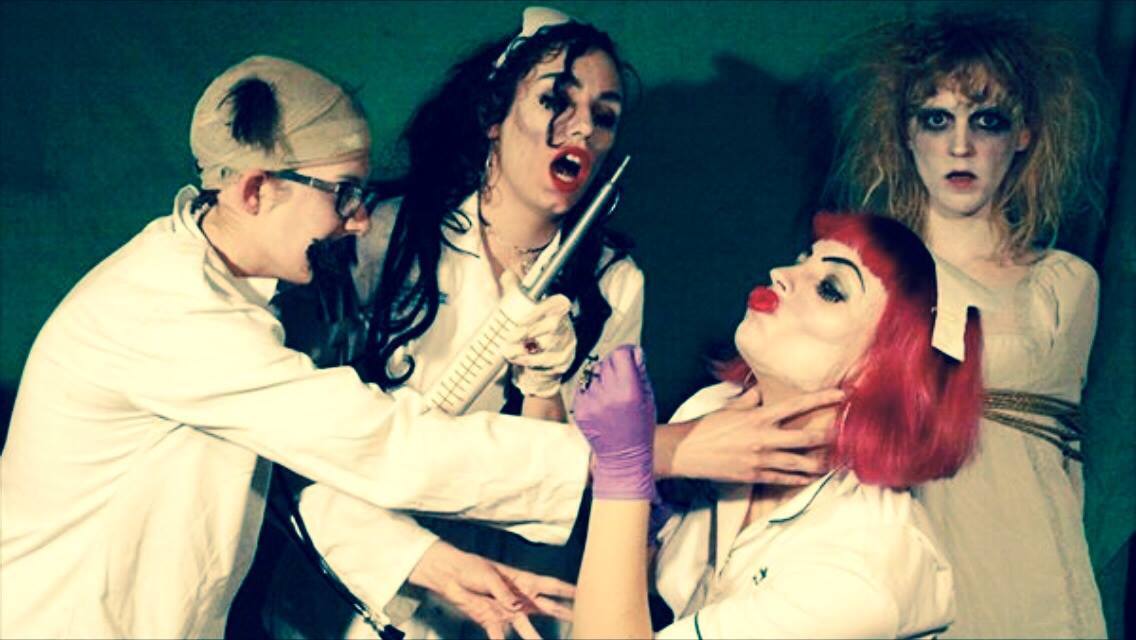 On Saturday 8th October 2016, 6-9pm, Instigate Arts take over the main gallery space at HOME in Manchester to host our ‘Identity’ pop-up exhibition. In this series of Q&A’s we get a little more insight into what makes some some of the participating artists tick. Here we speak with ILL. ILL is a genre-evading band which believes in the power of disobedient noise. With a repertoire of precarious pop songs and frequent improvised departures, ILL revel in the right to be weird, exploring the borders between the funny and the sinister, the personal and the political, the mundane and the surreal.

Can you tell us about your practice?

ILL’s practice has its main focus in collaborative music composition and performance. Additionally our practice may encompass video art, printmaking, drawing and design, building upon the themes explored in the music and lyrics. ILL’s process tends to be intuitive, rather than brief-driven, having its basis in improvisation. From a performance standpoint, ILL explores the tension between irony, satire and raw emotion.

How does your work relate to the themes of Identity?

Within ILL’s practice, individual selves (and the collective self from which the music derives) are made apparent. In the act of performance, we make these selves both highly visible and audible as we delve into the many roles we are expected to inhabit and culturally perform, as women and non binary people. ILL’s video work focuses on interrogating the representation of gender within popular culture, with an emphasis on cinema. ILL’s work is concerned with the impact of gender on everyday life, for i.e. mental health, role models, relationships, sexuality, beauty standards and so on, with a general aim of expressing the authentic self (as experienced individually and collectively) in counterpoint to heteronormative and kyriarchal structures.

Do you think the themes of Identity relate to the current political and social climate?

Identity is at the forefront of the current political climate. Debate rages around British national identity in the wake of the Brexit vote, and in light of an unprecedented refugee crisis.  There is an increasing recognition of gender diversity, as we begin to expand notions of our gender identities beyond traditional binary parameters. The generally accepted spectrum of sexuality continues to expand, allowing LGBTQIA+ people (in some parts of the world, at least,) to openly identify as such, and to take pride in their diversity. As technology advances, questions are surfacing about the nature, and future, of humanity. With the emergence of social media and the digital self, and advances in artificial intelligence and robotics presenting the possibility of immortality, the question of who we are has never been more prevalent.

How important is the role of artists’, and the art world, in shaping both people’s lives, and the social and political landscape?

Ideas can be expressed philosophically, mathematically, scientifically, in great detail and complexity but since human beings perceive the world first through their senses, it is arguably those ideas transmitted through music, sound and the visual image that have the most direct appeal to the human mind. Art tends towards complexity and ambiguity, and often exists at the junction between science, philosophy, sociology and spirituality. Works of art and music therefore help us to get to grips, emotionally and intellectually, with those things we don’t yet understand well enough to define in words or numbers. Art is a space of discovery and mystery, of ideas and emotions. It helps to define us as human and it exists because as humans, we are driven to ask “Who, and what, are we?”.