Sound From The Stores

Instigate Arts were pleased to team up with both Manchester After Hours and the People’s History Museum to develop the wonderful event, Sound From The Stores. Museums at Night is an annual, nocturnal celebration of the best of our museums and galleries – but Manchester has put it’s own twist on proceedings with Manchester After Hours, a one night only, city wide social. A mix of odd couplings and unexpected partnerships and a chance for people to get into places and spaces not normally open after hours.

As part of this exciting festival Instigate Arts presented Sound from the Stores; a unique one-night-only event that saw the Engine Hall of the People’s History Museum transformed into a sensory den of sound and vision. Audiences witnessed performances by some of Manchester’s most original and pioneering sound artists and artists working with sound. All artists created newly commissioned pieces to perform, inspired and created from the museum’s wealth of archive material, exploring some of today’s most socially and politically relevant issues.

Original Composition Premiered on the night:

“Sound From The Stores was one of my favourite events that we’ve had at the museum.  The works produced were excellent and were completely new to us in terms of interpreting and responding to our collections.”

I just wanted to say a huge personal thanks for last night – from images and feedback too the event went down so well – you should all be really proud of a job well done! Manchester After Hours was a really fantastic event across the whole city and you did such a sterling job at playing a major role in that! A night that i think we can all be proud of!

Caro C – In The Absolute Movement Of Becoming

“Perusing the archive catalogue, my interest was piqued by the 5 boxes of correspondence between Harry McShane & Raya Dunayevskaya. I found out a bit more about these 2 activist/theorists. Harry McShane was a Scottish socialist and Raya was the founder of the philosophy of Marxist-Humanism. They met in 1958 and continued to work together and write to each other up until Raya’s death in 1987. I was intrigued to see how they communicated – the tone, content and contexts in which they were writing.

“‘Darkest Hour is a sound-centric multimedia performance piece based around materials located in the People’s History Museum’s Archive concerning the refugee situation during the first and second world war. The performance mixes these materials with sound and audio snippets of the current refugee debate, illustrating the timelessness of the issue. With many problems solved but their solutions seemingly forgotten, and in the light of repeating history, we hope to demonstrate the relevance of the archival material in regards to issues of the present day.”

“Taking inspiration from the paintings of Cliff Rowe such as “ Women Working” and “Man At Work With Mirror Image”.These intimate portraits reflecting a British industry of a skilled workforce that is almost extinct today. The skilled hand of the worker and the skilled hand of the artist are brought together in blocks of colour and detail. 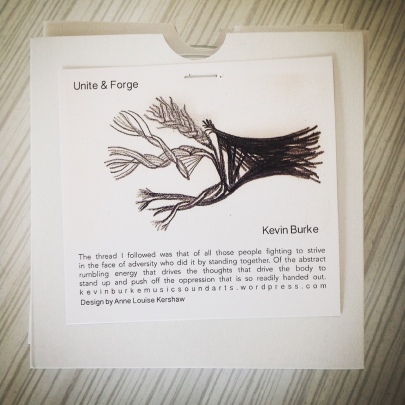 “I took my inspiration from the archive footage in the PHM archive of protests against apartheid in South Africa, Women supporting the 1984/85 miners strikes and poems and songs calling for workers to stand up for their rights and not be fooled or oppressed by corrupt, exploitative bosses.

The thread I followed and used was that all of these people fighting to strive in the face of adversity who did it by standing together. Billy Bragg’s version of There Is Power In A Union already does the brash guitar and vocals thing so well, so I went for the abstract rumbling energy that drives the thoughts that drive the body to stand up and push off the oppression that is so readily handed out.

Sound From The Stores Zine – Click image to view

Categories: ArchiveTags: Sound From The Stores